Scott Pilgrim is a series of six graphic novels written by Bryan Lee O’Malley from 2004 to 2010. The story is about a boy who falls for a girl named Ramona Flowers. The catch is in order to be with he 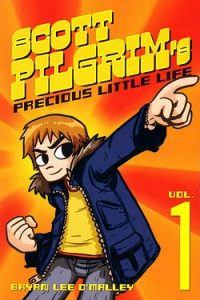 r he must defeat her 7 evil exes. Intended to be over the top and comedic at times, the series draws inspiration from number of genres and media. Some of these include super hero comics, manga, video games, and rock music.

In 2010, a movie adaptation was created, titled Scott Pilgrim vs the World. This film attempted to condense the entire series into one movie. There were obviously some differences, but the film tends to stay very true to its source material.

The interesting thing is that if you had no idea what Scott Pilgrim was all about, you would think you were watching a very normal love story film. That is until you meet the first of Ramona’s evil exes. A fight sequence ensues that involves very dramatic punches that send the characters flying across the room. The hits are also accompanied by on screen onomatopoeia as if it were in a  comic book.

Scott Pilgrim vs the World does an unparalleled job at reminding the viewer that it was a comic first. Aside from matching the character’s looks and costumes almost identically, the film uses the many of the same elements of the comic. As mentioned earlier, the fight sequences include onomatopoeia (whip, bang, slice, etc). Many of the visual effects draw inspiration from the comic world. Even the transitions in the film are often similar to that of a page turning. 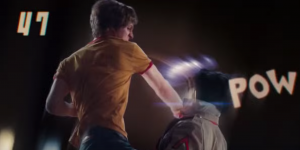 Scott Pilgrim vs the World maintaining so many elements of the comic itself has a lot of implication for the notability for comics in general. Theres ways that graphic novels can tell stories that even movies can’t. Adapting them to screen is almost simply “for fun”. Although we tend to think of movies as the pinnacle of storytelling media, putting the content into a film does not necessarily make the content better. We should start looking at the film adaptations of literature as entirely different entities than the source work. I believe thats why fans are often upset with movie adaptations of their beloved stories.

Alternatively, the movie version offers elements that aren’t available in the graphic novel version. For example, the protagonist is in a rock band. This aspect of the story is actually very important to the graphic novel, which is interesting given that books don’t make sound. The movie allows fans to actually hear the music, as opposed to simply reading the lyrics as his band performs. The movie’s creators enlisted the help of several legitimate musicians, such as Beck, to compile a track list for Scott Pilgrim’s fictitious band. The soundtrack is available for listening/ purchase if you want to check it out.  Along with a film and an album, there was a video game release in 2010 as well. All this spawned from one seemingly silly comic, that artistic minds decided to build upon and adapt.

Again, it’s important to look at the film and the source material as two different pieces of work. Even though the film is an adaptation, it bring a lot of originality to the table and is enjoyable to a broader audience. One is not necessarily better than the other. Regardless, it’s truly incredible to see what a comic book can inspire.