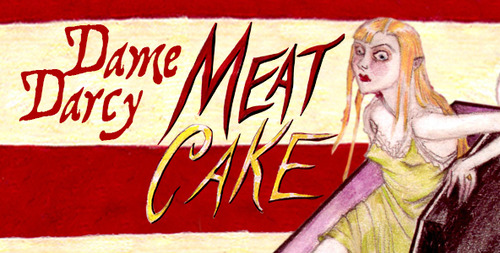 The first time I read Dame Darcy’s Meat Cake comics, I received it as a gift for either my birthday or Christmas. It was a gift from my Mom’s weird but very cool boyfriend (who is now my father) when I was in high school. A few years later for a Christmas I received The Meat Cake compilation which included issues one to eleven. Her comics include such wonderful story telling, dark (sometimes extremely dark) humor, and small flecks of stories of her life. With exception for one story that is consistently shown in small shorts, all of her other stories are short little tales. Darcy Darcy herself is a unique personality and perspective.

Dame Darcy’s artistic style is very detailed and has wonderful movement. It almost always has a balance between being whimsical yet dark at the same time. 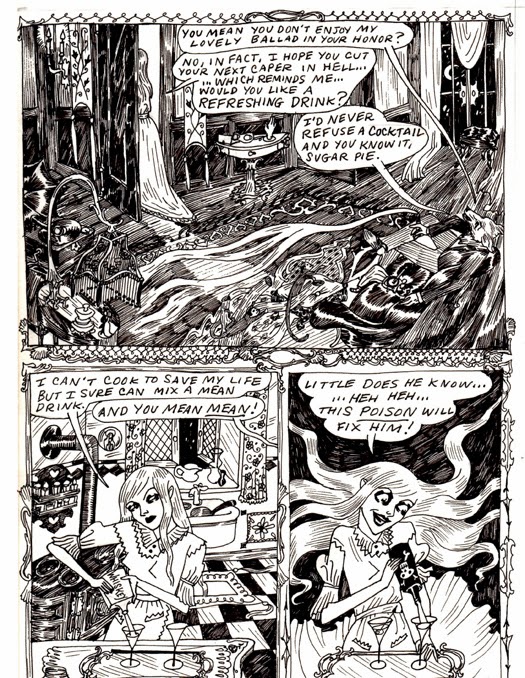 The lines drawn create the flawless movement and make it almost animated. The painstaking detail put into every panel is so excellent it draws your eye and keeps your focus. As someone with ADHD it’s very hard for me to keep focus on anything yet this kept my attention through all eleven issues in the book.

The panel next to this passage is actually a recurring story line. The girl is Richard Dirt (a woman who seems to mirror Dame Darcy) and the wolf on the couch is Wax Wolf ( a pervert wolf who is also a zombie.) There are other reoccurring characters like Strega Pez ( a girl who speaks through pez tablets dispensed through her throat), Effluvia (a evil mermaid who treads land on a wheelchair who also seems to drive a car somehow), Friend the Girl ( a girl who as her name suggests has no outstanding qualities besides being the unmemorable female friend), Scampi the Selfish Shellfish ( who as the tongue twister name suggests is a pet Shellfish who is sarcastic ,annoying, and of course very selfish), and Hindrance and Perfidia (conjoined twins who also seem kinda evil who have a hobby of knitting.) These reoccurring stories include these characters adventures. Sometimes they tend to be strange for  they never have a concise ending. Take for instance one issue where Richard Dirt is revealed to have a doppelganger who has terrible misfortunes that Richard seems to unknowingly benefit from. The doppelganger will lose precious jewelry that will at some point turn up in Richard’s life. This doppelganger’s issue is never resolved and we never see her again. In another issue Richard becomes magnetic and attracts every piece of metal around her. The story ends with her finding  love due to her magnetism. The panel above tells a story of Richard trying to poison Wax Wolf only to find his mother use to feed him poison and he considers it home cooking. These stories have strange funny jokes like this.

Richard Dirt, as I said before, closely resembles Dame Darcy. Not only in appearance but desires. In the doppelganger story she mentions how she received the jewelry from a man in France where she was a famous actress and a noted cartoonist. At the beginning of issue six Dame Darcy conveys five wishes she has for the future. Two of them being “3. I wish to be an actress in movies that cater to my “special needs” (silent star, gothic, preraphaelite, victorian style) Horror is always happily accepted.” and ” 4. I wish for my comic book and other publications to be published in other languages.” Richard Dirt has both of these things and seems to be an extension of Dame Darcy and her wishes for the future. In the context of the story of the Doppelganger it  could even be said that Dame Darcy might feel like the Doppelganger, always wanting the things that Richard Dirt has. Her appearance comes in many forms throughout the story, which almost feels like she lives through her characters. 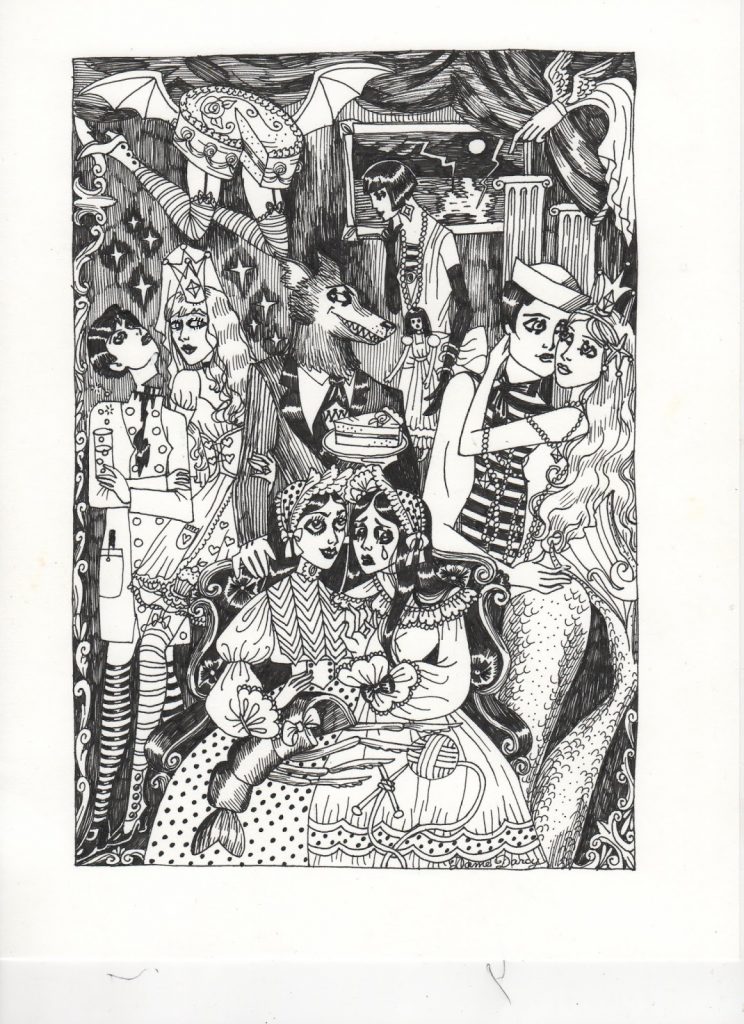 The other one shot stories always seem to be based around women, and these women are never alone. There is almost always a companion ( usually female)  whether it is a relative or a friend. For the most part of the stories 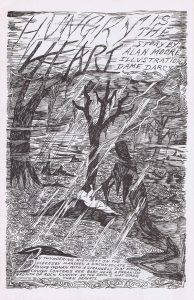 have an element of death and sometimes of the supernatural. Many of the stories include conjoined twins, not even as a focal point to he story but just there, being themselves. Freak shows often pop up in both the one shot stories and the reoccurring stories. Dame Darcy falls close to many elements and always seems to bring them up fresh. Stories like Hungry is Heart which is told by a narrator with no dialogue bubbles. It almost feels like a silent movie the way we move through the main character’s adventures through her life. Though some stories have this 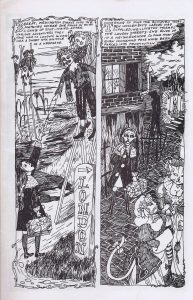 method of narrator only many of the stories are driven by typical dialogue. The way dialogue moves is to the point almost punchy. Due to the short nature of her stories getting to the point is needed, yet it does not take away from the story it really helps the story for it really gives it the tone conveyed by it’s time frame. Many times she uses walking paths as means to convey the narrator’s words. The charming dark supernatural qualities of death and magic go beyond the expected and never fall into cliches. 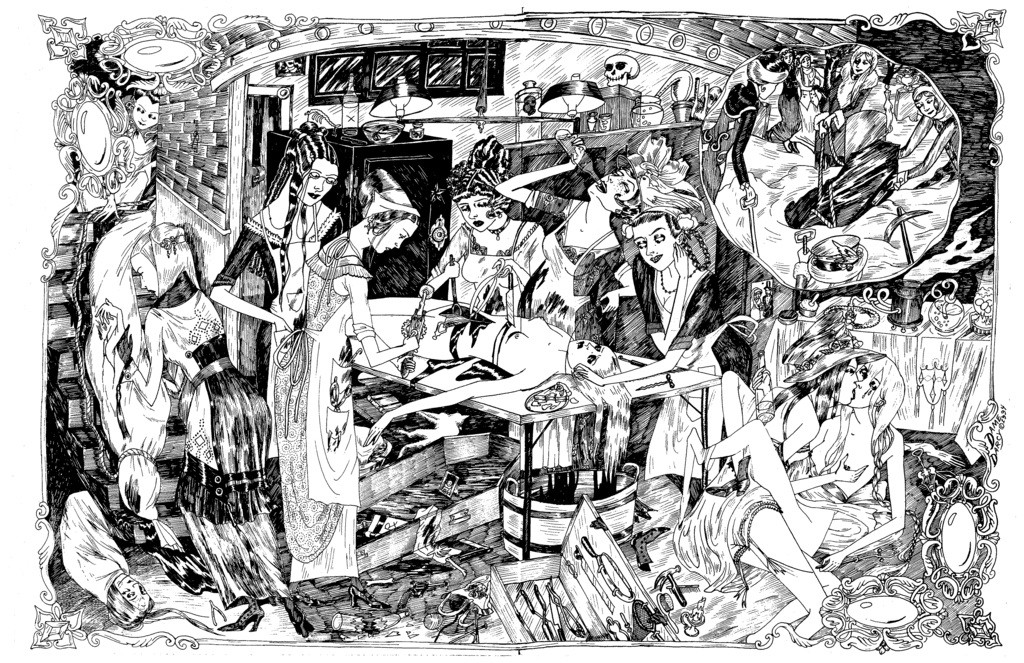 Another section of her short stories include stories of her childhood or personal diary entries turned to drawn stories. These personal stories draw an insight to her life and the things that seem to inspire her stories. The personal insights into the magic in her everyday life as a child and adult. Childhood stories always tend to be be weird and funny from the perspective of a child and Dame’s Darcy’s are no different. Take for instance her story where she is sharing memories with her 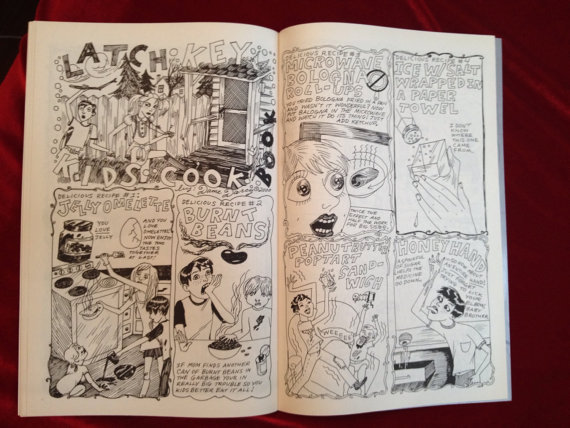 brother and he mentions a time when she made two yolks appear from one egg with magic. She reminiscences how for the life of her she could not remember how she did it. In another story she talks about recipes she had as latch key kid, shown in the picture next to this passage. Then there are other stories that give insight to her adult life. Her adult life has been filled with many incredible strange occurrences such as a diary entry about her road trip to New Orleans. 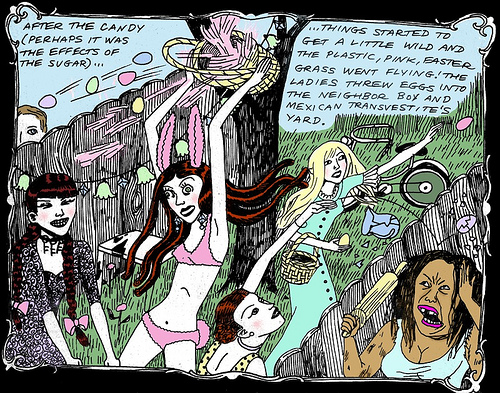 With all these stories that come together to make a whole story that has flow and appeal. They reflect something greater and become a world of their own. Each story seems to make up the weird and wonderful mind of Dame Darcy. Each piece a connecting like a door into another. These short and punchy pieces reflect the ability Dame Darcy as to grab attention and appreciation into these short moments. You could easy breeze through this book within an hour but you will easily spend many more appreciating the art and style. The lines that make up this hauntingly beautiful world also drives the intense movement. If you find yourself interested in more of the creative works of Dame Darcy I encourage you to visit her website. 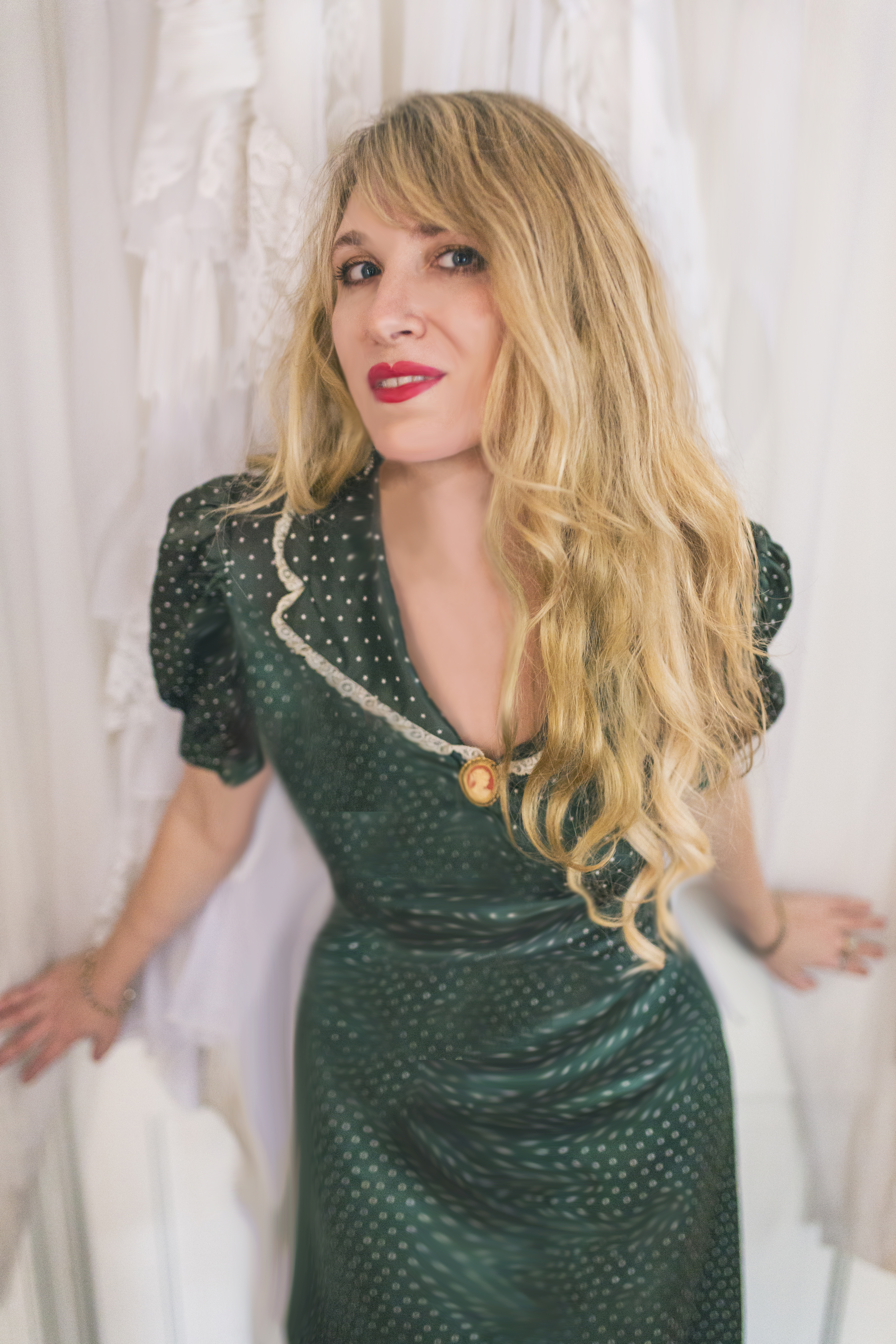