Throughout the past couple of years, memes have become more and more culturally accepted and have found usage throughout all corners of the globe that have access to the internet. Well what is a meme? Webster would define it as, “an element of a culture or system of behavior that may be considered to be passed from one individual to another by non genetic means, especially imitation”. However, me, an intellectual, knows that the real definition of a meme is “a humorous image, video, piece of text, etc., that is copied (often with slight variations) and spread rapidly by Internet users”. While memes can range from anything between an outlet for your feelings or opinions, to literal shitposting such as the meme man, their elegance shines through when they are found within comical context. Many a kid born before or during the 90’s would know of Sonic The Hedgehog. If you don’t, I suggest you stop reading this horrible article and go pick up an NES. Now that you’re back, I’m sure you are also now aware of one of Sonic’s companions, Knuckles The Echidna. If you don’t remember, thats alright cause I have an image of him right here.

In January of 2018, Knuckles the Echidna was revisited by the online community with the introduction of VRChat. Now VRChat originally came out in February of 2017, but did not receive much attention as not many people owned virtual reality devices such as the Oculus Rift. Through the exposure of Twitch (the online streaming app), however, it began to see an increase in popularity until it skyrocketed among the community this January. The game itself is very simple. You choose an in game avatar who will represent you in the 3-D world. After that, you just talk with your friends or any strangers you meet. The open ended possibilities of this game make it very enjoyable to watch, but that all ended the day the Ugandan Knuckles attacked. Insert Mass Clicking

A Youtuber by the name of Gregzilla has been making reviews of games and content on youtube as far back as 2015. In a 2016 video of him impersonating an African Drug Lord, he says the infamous lines, “follow me, I know the way”. He then begins to ask other players if “they know the way”. It all goes downhill from here so buckle up. In February of 2017, around the same time that VRChat came out, Gregzilla created a review of the game Sonic Lost World, and in this god forsaken review, lied in wait, the worst parody image of Knuckles the Echidna possible. This image, accompanied with a large Twitch following of the popular game PlayerUnknown’s Battlegrounds known as the Ugandan Warriors, sowed the seeds of destruction for the meme calender of 2018. 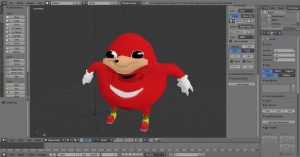 On December 22nd, 2017, another Youtuber by the name of Stahlsby created a video called “You do not know the way”. DO NOT go watch it, if you value yourself as a human being. In this video, a bunch of players who are on the game VRChat, use this rendition of Knuckles to actively annoy every other community member with mass amounts of clicking and the phrase, “You do not know the way”. This is later turned into, “U do not no de wae”.

From this point, the meme loses all control and develops its own persona. The “Ugandan Warriors” as they call themselves, begin to multiply as the 3D image is available for anyone to download as an avatar in VRChat. They develop a brotherhood under the pretext that they must find the way, and there is only one person who knows the way. THE QUEEN.

The queen is none other than Kanna Kobayashi, from the Anime, Kobayashi’s Dragon Maid. If a person is wearing this avatar in VRChat, all Ugandan Warriors are supposed to come flocking to her, and click repeatedly in their mics. They must also defend the queen to the death by the only means they have available. Spitting on all other “fake queens”. If you do not recognize the queen, you are considered hostile and will be spat upon. You will also be clicked at. I warn you, it is not pleasant.

After the massive wave of Ugandan Warriors, deviant artists and other members of the reddit community began to take flight with the image of the Ugandan Knuckles, and created a vast supply of memes that could last us until 2027. That is, if they weren’t all literally shitpost. This is all you need to know about the meme, I highly suggest you don’t go looking for more information. You do so at your own risk.

Mass clicking in the distance

YOU DO NOT KNOW THE WAY