When Darkest Dungeon was in it earliest development, it was going to be tile-based where the player would be looking at the the characters’ heads from the top down.  Fortunately, they opted for a more personal vantage point.  The horrors that the characters encounter on their delve into the depths of the titular dungeon would not be as striking unless we were allow to see it up close and personal.  The 2-D aspect of the game helps this–we’re not looking at these characters as pieces on a chess board, but like characters on a moving slide reel.  Red Hook Studios wanted the player to see more of the action and get a feel for the characters. Every action, reaction, ranging form entering combat to hitting enemies or aiding allies plays out like a series of panels in a comic book.

The style that Bourassa uses in Darkest Dungeon is similar to that of Mike Mignola’s Hellboy series.  The characters are made to look gritty and weathered.  The lines on their faces are highly accentuated, but their eyes are always hidden–either by mask or by shadow.  In fact, the only eyes that are ever visible in the game are those of many of the horrific monsters encountered by the adventurers.  The lack of visible eyes plays on the theme of intent–the player cannot completely trust these heroes.  Stress, one of the main mechanics in the game, can cause these heroes to become selfish, abusive, fearful, and prone to collapsing into insanity.  One moment, the Crusader can be paving the way for a swift victory over the undead denizens of the Ruins, and the next he’ll be cowering in the back, quivering at the grotesque monsters of the Weald. 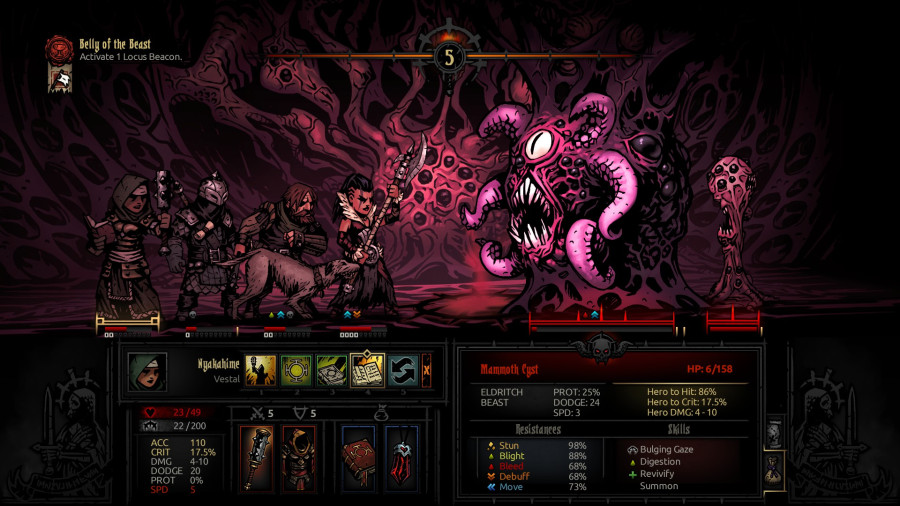 The graphics in the game also denote the impact of the Affliction system, dramatically emphasizing the stress inflected on the heroes.  In comic-book style, boxes of dialog appear over the characters, but taking on a more jagged shape in a twisted reflection their current mind.  Darkest Dungeon is driven by its Stress and Affliction aspects, constantly reminding players that they are never fully in control of any given situation.  Driving this home is the art style which gives the players a sense of the same unfriendliness, dread, and terror experienced by the heroes therein.  Shadows threaten to overwhelm each and every image and the viewer is left to think what lies beyond the darkness.

Before the journey begins, the player is tasked with provisioning his or her party.  The player is welcomed by a devious-looking provisioner awaiting transaction.  In spite of the supplies hidden behind him, most of the background is cloaked by pitch blackness.  His eyes are completely invisible, giving his face a deathly look.  This man is selling the player supplies which will be vital for the journey ahead, but the one cannot help but feel that he’s up to no good.  The art perpetuates this feeling of distrust and constant unease.

On the Darkest Dungeon website, the developers provided players with a short series of comics that tell the back stories of the various classes the players can use in parties as they explore the dungeons around the Hamlet.  Here’s one featuring the Highwayman:

This is that human element that Chris Bourass and Tyler Sigman were so concerned with applying to the heroes.  The reality is that the “heroes” are not so heroic after all.  They’re broken—psychologically traumatized and transformed by past deeds and by the ongoing incursion into the titular dungeon.  In the comic above, we as readers are left to glean the horror of what the Highwayman has done.  Although it is quite clear he’s haunted by his deed, we still cannot seen his eyes.  His face is like a skull, lifeless and almost entirely devoid of emotion save the lines on his face contorted in shock.  The reader looks at his face through the broken window of the stagecoach, the jagged edges of the glass encircling his visage, illustrating the encroaching shadow of guilt.

While the game succeeds in promoting the frailty of humanity, the player is constantly throwing these characters into danger.  The game holds true to its original design intent; giving players the same sense of despair as the characters experience throughout the game and the art supports this design phenomenally.