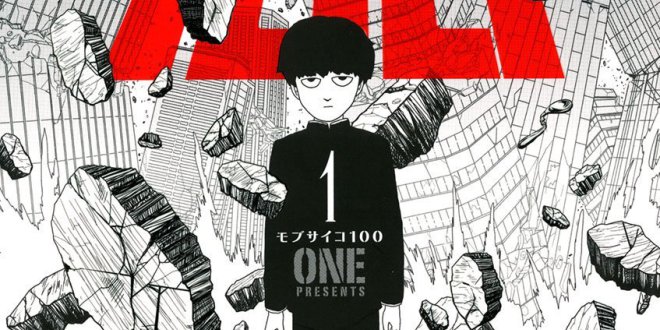 In the middle of 2016 someone posted the opening for the show Mob Psycho 100. Somehow it found it’s way to me, and after watching the craziness that was the opening, I really wanted to see what would come from the show. Knowing that the manga was made solely by ONE, who also made (and remade with the artistic talent of Yusuke Murata) One Punch Man, I was interested to see what would come from it. The show’s style was different and unique incorporating new types of animating styles, the story was funny and interesting, the characters all enjoyable from Mob, the over powered main character who can’t read others emotions or his own, to Reigen, Mob’s “psychic” teacher who is really a normal con-man, and by the end of episode 1 I was hooked. It wasn’t until about half way through the show that I couldn’t handle another week of waiting and decided in between to read the manga.

I’ve read many people’s descriptions of ONE’s art style and unless you are one of the ones like me who have fallen in love with his style, the general consentience is “this is the worse art style I’ve ever seen.” When I started reading, I was one of those people. It’s not as pretty as other comics I’ve read, and it’s not aesthetically pleasing as the anime either. In all honesty, if it wasn’t for the fact that I had watched the first half of the show, I would’ve dropped it for the art. But instead I kept going, knowing the story was good. As I went on reading, I found that the art style actually did make a positive difference to the story.

One of the things I found as I kept reading was that the art style actually really helped the story. When people usually read manga, or comics in general, they tend to lean more towards works that look or feel similar to each other. Because of this, there is a certain kind of expectation when it comes to reading these works in that they should follow a similar format as the others like them, causing an issue in the medium where many comics look and read so close to each other that unless the creator does something completely different, the reader is reading the same thing over and over again. Because ONE’s style is so different than the norm and considered so much worse than it, Mob Psycho 100 gains a different effect than the others of it’s genre. As I read it, I found myself paying more attention to the story, jokes, and how the main character acted because of the quality of the art. Since Mob’s whole design is based around how plain and unfeeling, any difference to the straight face the reader is used to is noticed. Scenes such as when he first lets his emotions explode make an impact because the readers see the change both in the quality of the art and the style. This is seen even more as the story continues, with monsters looking scarier with a bit more detail put in, dramatic scenes more suspenseful as the usual plain background is more detailed, and jokes hit funnier with different changes.

Another part of what makes Mob Psycho 100’s art style so interesting is that you get to watch ONE’s style develop as the manga goes on. The manga itself ran for a total of five years, ending in December of 2017. Throughout that time, ONE worked on several mangas at one, but ended up putting his most popular and known work, One Punch Man, on hiatus so that he could work solely on this manga. Because of this, when you read the manga, you feel how much he cares and how much he has progressed as an artist through the production. If you go back and reread the whole thing after finishing it becomes even more clear. The style is more consistent in the later chapters than the earlier ones. The characters hold a similar style to their previous panels when earlier chapters had varying changes in how they were drawn from page to page. Because of this developmental change in the art style, readers are able to see the growth of both the story and creator as they read.

When I first began reading Mob Psycho 100, I thought the art style was going to be a huge hurtle I would have to get over to actually end up enjoying what I was reading. Instead, it ended up being barely a bump that I wouldn’t notice after a while and come to love later. While the art style is not what is generally considered “good” for it’s genre, the effects done using it move the story in away that suck the reader in more, making them pay more attention to what is going on both in the story and to the characters.

If you’d like to see the manga for yourself, while it is not available in print copy in English, there are versions of it translated online. Or if you just want to watch a fun show, the whole anime is subbed on Crunchyroll and dubbed in English on Funimation.

Update 4/30/18: For those who may want to read it, recently it was announced that the manga will be published in English on October 24, 2018.