Whether it’s the ability to alter the fabric of reality or the power to manipulate probability, there is no shortage of over-powered superheros in Marvel Comics. If you asked a comic fan who the most op character is, they would most likely name one of the following: Thor, Hulk, Silver Surfer, Scarlet Witch, Franklin Richards, Sentry, etc. However, there is an unexpected character deserving of a spot in the top tier…Squirrel Girl. Here are some reasons why Squirrel Girl (Doreen Green) is one of the most powerful characters in the Marvel Comic universe.

*Disclaimer: All images in this post belong to Marvel* 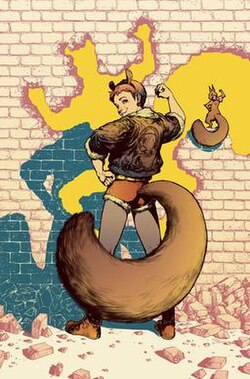 Squirrel Girl has a skill-set that puts her on par with most heroes. Her powers include:

Squirrel Talk: allows her to communicate fluently with squirrels. She can  ask them to team up with her and either fight or distract foes.  There’s no training for fighting squirrels, so dealing with them can make even experienced fighters frustrated. Squirrels are also faster than people, as well as many other animals.

Squirrel Anatomy: she has a prehensile tail and small, sharp claws.

If I had to describe Squirrel Girl in one word, it would be underestimated. She is often mocked for her appearance and seemingly lame powers. Part of her story is overcoming the wackiness of her powers, while also learning to use them to her advantage.

Using her abilities, intelligence, and pure wackiness she is able to crush enemies that even the Avengers struggle to deal with. Here are some notable examples: 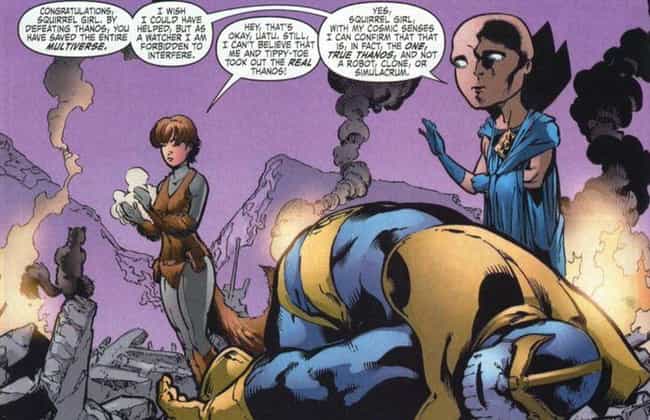 In Great Lakes Avengers Special #1 she defeats the mighty Thanos off-panel. No one knows how she did it except the watcher Uatu, who congratulates her and confirms that yes, that was the real Thanos.

Deadpool has become a fan-favorite among readers, however even he isn’t able to best the unbeatable Squirrel Girl. In Cable & Deadpool #30 she scratches and kicks her way to victory, despite Deadpool having a healing-factor, weapons training, and being skilled in hand-to-hand combat.

Dr. Doom is Squirrel Girl’s arch-nemesis. She defeats him for the first time in her debut comic Marvel Super Heroes Vol. 2 #8. This manages to impress Iron Man, who would’ve offered her a spot on the Avengers if she hadn’t only been 14.

Squirrel Girl is an amazing addition to the Marvel Comic universe. She is a much needed non-sexualized female character, who is powerful and funny. The Squirrel Girl series is also one of the very few Marvel comics to include a transgender character. If you’re new to comics or are looking for a unique story with a unique character, I highly recommend reading Unbeatable Squirrel Girl or any of the other Squirrel Girl comics.

1 thought on “The Overwhelming Power of…Squirrels?”